Mrs. Rubye Terrill Lomax, Dr. Cora M. Martin, Mrs. Lalla M. Odom and Miss Lela Lee Williams, banded together in Austin, TX in 1929.  They had a vision of great things to be attained by women teachers who held high ideals which were not to be tarnished or cast aside.  Little did they dream that within only a few years this reaching for the stars by so small a band would swell to international proportions.

Beta Zeta Chapter Founding in 1935
The local Beta Zeta Chapter came into being on March 23, 1935, when founder Dr. Annie Webb Blanton and charter member, Mrs. Lalla M. Odom were invited to a luncheon at the Nimitz Hotel. They officiated in the organization and the initiation of the Beta Zeta Chapter. 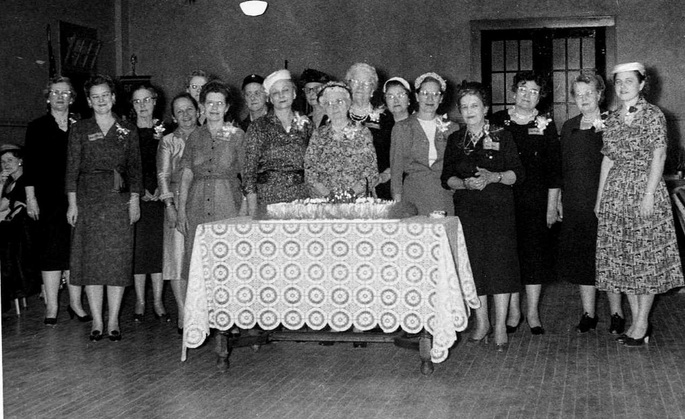 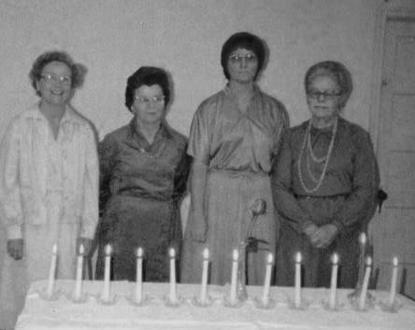 Betty Schmidt, Margaret Bierschwale, Patricia Loomis, Myrtle Westerfeldt
In 1981, under the leadership of Mrs. Myrtle Westerfeldt, it was recommended that this chapter expand because of size and distance.  By 1983, plans were completed and Menard, Mason, and Kimble counties formed a separate chapter, Lambda Omega.  The 45 members of Gillespie County remained the Beta Zeta chapter.
The first few years following the reorganization (1982–86), Beta Zeta worked under the leadership of Leola Nielsen in building local membership and participation.  Several joint meetings with the Eta XI and Lambda Omega chapters provided continuity as well as fellowship with former Beta Zeta members.  Informative programs on the many changes occurring in education, such as House Bill 72, kept members current.
In March of 1985, Beta Zeta celebrated its fiftieth birthday with a special dinner ceremony.  Two of the distinguished past members, Miss Ella Gold and Mrs. Elizabeth Walters, were honored by a memorial tribute.  A plaque honoring our first Beta Zeta president, Miss Julia Estell, was presented to the Vereins Kirche for safekeeping in its archives.
In 1986, Beta Zeta nominated Fredericksburg I.S.D. for commendation at the state level for actively promoting women to administrative leadership positions.  Individual members demonstrated creativity, initiative, and distinctive service in many ways.  Of particular note at the state level politically, Beta Zeta member, Lucille Rochs, was elected to the first Texas Silver Haired Legislature and Mrs. Ophelia Weinheimer published the book, The Search for Emma’s Story, based on pioneer times in Texas.
During the 1986-1988 biennium, Beta Zeta began having regular meetings at St. Barnabas Parish Hall instead of holding the meetings in the homes of members.  Following the resignation of Barbara Caster in 1987, First Vice President Frances Floyd took over the presidential duties.  Under Miss Floyd’s capable leadership and in response to her gentle humor, membership and participation in Beta Zeta grew and was revitalized. 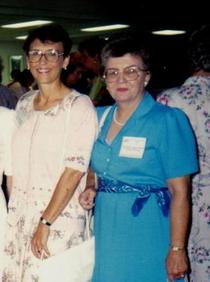 Trish Schmidt and Margaret Bierschwale
An emphasis on literacy was the focus of the 1988-1990 biennium.  During the presidency of Patricia Schmidt, Beta Zeta began a project involving collection of books to be given to young mothers through the Early Childhood Intervention and Women in Crisis (ECI/WIC) programs.  The Chapter also adopted the newly formed Primary School library and provided it with books and stuffed animals to encourage reading.  Active participation and membership grew, and as a result, Beta Zeta received the Best 1988-1989 Attendance Award for Area XIII at the state Delta Kappa Gamma convention.
President Jane Immel led the Chapter from 1990-1992, during which time orientation practices were updated as well as resources and materials from International.  Beta Zeta continued its emphasis on literacy through programs and individual participation in the Literacy Council.
Beta Zeta continued to have as a goal the active involvement of its membership and to keep members updated on the unending legislative changes.  One such effort was a program instituted by State Board of Education member, John Shields.
Mrs. Margaret Bierschwale took over the presidential reins from 1992-1994.   Her main goal was more membership involvement in committee work.  A regular newsletter was begun, Chapter rules were updated, and Beta Zeta submitted an invitation to host the area meeting.  At the Chapter birthday celebration, charter member Effie Roy Felps attended and gave an inspiring talk recalling fond memories of friends, activities, and special moments of her ΔΚΓ days.
Dr. Evelyn Farmer provided presidential leadership from 1994-1996.  Her goal was to increase personal membership and group involvement.  Special notebooks and folders were organized to help officers and committee chairmen assume more active leadership roles.  The newsletter received awards for both years and the local chapter hosted the area meeting.
Dr. Linda Runkel, President in 1996-1998, focused on two goals.  The first was a continuation of former Presidents’ Bierschwale and Farmer’s efforts to increase personal membership and group involvement.  During the biennium, six new members joined Beta Zeta and continued effort was made to get committee members active in committee work.  Committee chairmen were also encouraged to consciously train selected committee members to move into leadership roles.  The second goal was to return Beta Zeta to compliance with International Committee structure and to strengthen the Chapter’s funding.  By-laws and Chapter rules were revised, a budget timeline was put in place, and dues were increased.  The newsletter received awards for both years, Grants-in-Aid were awarded both years and the Chapter continued to have August planning sessions for theExecutiveCommittee.
Serving as President from 1998-2000, Evelyn Weinheimer patterned the Chapter goals to fit the strategic plan recommended by the Alpha state president, Mary Ann Waldon.  The goals of her predecessors to increase personal membership and group involvement dominated the integral parts of goals #1 and #3 of the strategic plan.  Goal #2 was to increase public knowledge of the society.  Members collected and donated toiletries, paper goods, and reading materials to the Battered Women’s Shelter and K’STAR.  To develop literacy, members donated time to read to young children at the local Wal-Mart to support READ ACROSS AMERICA. Retired members mentored and volunteered to read at the local school campuses.
The Chapter newsletter received the Five Star Award both years.  Outstanding member teachers were recognized with Achievement Awards.  Chapter rules were amended to allow for voting on potential members in April, with orientation taking place during the summer months and initiation completed in October.  The rationale was that as new members would already be paying the yearly dues, they would be able to avail themselves of the benefits of the Chapter membership.
Click to set custom HTML